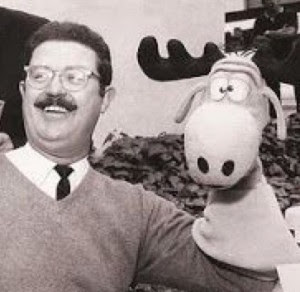 Scott’s career began during WWII when he worked in the US Army’s First Motion Picture Unit under the command of Ronald Reagan. Following the war, he became a story man at Warner Bros. working under Arthur Davis, a writer for Bob Clampett’s Time for Beany puppet show, and worked on the adaptations of Gerald McBoing-Boing and The Tell-Tale Heart for UPA. He later served as the voice director for The Gerald McBoing-Boing Show and dialogue director for the film 1001 Arabian Nights. Scott was recruited into Jay Ward Productions when Jay Ward’s original partner and writer, Alex Anderson, was content with civilian life. He helped develop The Adventures of Rocky & Bullwinkle and subsequently became the voice of the titular Bullwinkle when Ward liked the voice Scott used during their scripting sessions. He continued to write, produce and act in all of the shows created by Ward, although he never received on-screen credit for his voice work. Because Ward’s studio was primarily sponsored by General Mills and the Quaker Oats Company, Scott also had the opportunity to write many of their commercials. In 1952, he became President of the Screen Cartoonist’s Guild and was also a member of the Screen Actors Guild. He was elected to the Board of Governors of the Academy of Motion Picture Arts and Sciences. After a decade of inactivity, Scott returned to writing and acting in the 80s, doing Rah Rah Woozy for Ward followed by The Puppy’s Further Adventures for Ruby-Spears Productions, Alvin & The Chipmunks for Bagdasarian Productions, and Walt Disney Television Animation’s first two productions, The Wuzzles and Adventures of the Gummi Bears. Scott died of a heart attack in 1985.