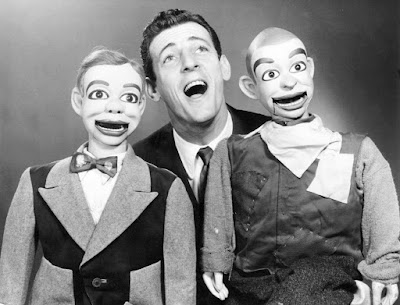 Winchell had ambitions to become a doctor, but the Great Depression eliminated any possibility of his family affording medical school. While sick with polio, he saw an ad for a ventriloquism kit and created his first dummy: Jerry Mahoney. He worked on his act and took it to the Major Bowes Amateur Hour in 1938, which he won. The prize included touring and playing with the Major Bowes Review. Bandleader Ted Weems saw Winchell and offered him employment, which Winchell accepted. He refined Jerry’s design and created a second dummy, Knucklehead Smiff. He also created Ozwald, a character rendered by drawing a face on his chin and filming himself upside-down. He and Jerry first appeared on radio in 1943, but was overshadowed by Edgar Bergen. They found success in the 1950s on television with The Paul Winchell Show, which aired in various timeslots under various names and formats for its duration. Following that, Winchell and his dummies appeared on various programs, with his last regular on-screen role being in the children’s game show Runaround. Beginning in 1968, Winchell became a voice actor, notably as the voice of Dick Dastardly for Hanna-Barbera and Tigger in Disney’s Winnie the Pooh franchise, and later on as Gargamel in The Smurfs franchise. In between, Winchell realized his medical ambitions by becoming a pre-med student at Columbia University, a graduate of The Acupuncture Research College of Los Angeles, working as a medical hypnotist at the Gibbs Institute in Hollywood, invented an artificial heart with Dr. Henry Heimlich, and developed over 30 patents. In the 1980s, he attempted to aid starvation in Africa by coming up with a way to cultivate tilapia fish in tribal villages, but was denied Congressional support. Winchell retired from acting in 1999 and died of natural causes in 2005.