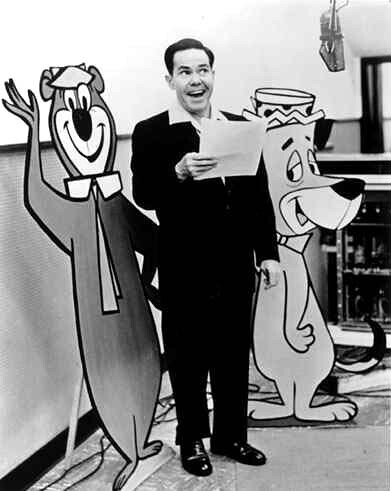 Regarded as the nicest man in the business, Butler began his career as an impressionist, winning most of the amateur contests he entered as a means to help him combat his shyness. That led him to gain professional gigs at vaudeville theaters. He joined Jack Lavin and Willard Ovitz to form the comedy trio The Three Short Waves, who played theaters, radio and nightclub engagemtns. After serving in WWII, he voiced his first theatrical short Short Snorts on Sports for Screen Gems in 1948. Following that, he became a regular performer in shorts directed by Tex Avery for MGM and the Warner Bros. puppet show Time For Beany working with Stan Freberg. Butler worked on several commercials and comedy albums with Freberg, and also appearing on Freberg’s radio show. In 1957, he became a regular player for Hanna-Barbera beginning with The Ruff & Reddy Show, and worked often with Jay Ward Productions first in The Adventures of Rocky & Bullwinkle and as the first voice for Cap’n Crunch in commercials. In 1975, Butler began an acting workshop that molded such stars as Nancy Cartwright, Corey Burton, Bill Farmer, Pat Parris, Bob Bergen, Mona Marshall and others. Butler died of a heart attack in 1988, and was succeeded by his protégé Greg Burson in many of his roles.