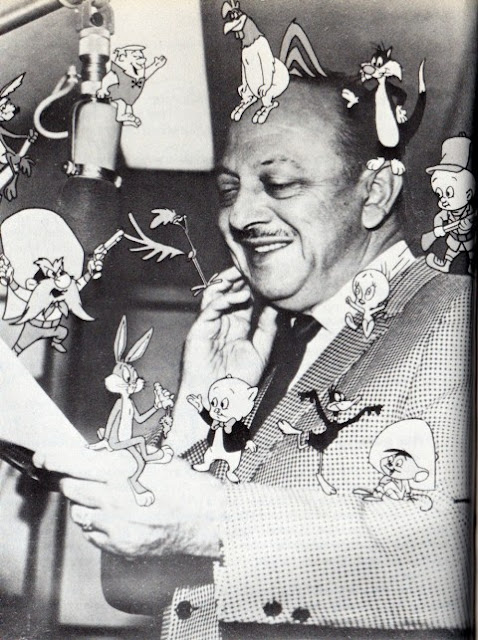 Known as the man of 1,000 voices, Blanc became an orchestra conductor at age 19 and performed schtick in vaudeville shows. He made his acting debut in 1927 on the Portland, Oregon radio show The Hoot Owls where he gained attention for his ability to do multiple characters’ voices. He bounced between radio in Portland and Los Angeles before landing a recurring spot on The Jack Benny Program, playing multiple characters and providing sound effects for Jack Benny’s jalopy. That led to his own radio show, The Mel Blanc Show. In 1936, Blanc joined Warner Bros. where he would come to voice almost every male character in the Looney Tunes stable for his entire career. He also originated the voice and laugh of Woody Woodpecker for Universal Pictures before becoming a WB-exclusive player. In 1944, he became the first voice actor to receive on-screen credit for his work in an era when only the director and producers were credited. After his contract expired, Blanc became a regular performer for Hanna-Barbera while still working for WB; notably in their flagship franchise, The Flintstones. He continued to provide the voices for most of the characters he originated throughout his entire career (certain ones becoming more difficult to do with age, and ceded to replacement actors). After a car accident left him comatose in 1961, his neurologist successfully managed to work him out of it by addressing him as his characters instead of Blanc himself. His son Noel and colleague Daws Butler voiced several of his characters while he recovered. In 1962, he and Noel formed Blanc Communications Corporation, which produced thousands of PSAs and commercials. Blanc had been a smoker since age nine, quitting at age 77 after being diagnosed with emphysema. In 1989, he was hospitalized with advanced coronary artery disease and died shortly after.