TRANSFORMERS: RESCUE BOTS ACADEMY
(Discovery Family, January 5, 2019-June 5, 2021)
Boulder Media Limited, Allspark Animation
MAIN CAST:
Pierce Cravens – Hot Shot
Courtney Shaw – Whirl
Alan Trinca – Hoist
Adam Andrianopoulous – Medix
Mason Hensley – Wedge
Paul Guyet – Heatwave, Doc Ezra Greene, Mayor Luskey
Todd Perlmutter – Tough Luck Chuck, Rachet, Jerry, Huxley Prescott
For the history of Transformers, check out the post here.
Transformers: Rescue Bots Academy is the sequel spin-off of Transformers: Rescue Bots and an adaptation of the Hasbro toyline of the same name. The series picked up where its predecessor left off: a new academy had been built with the purpose of training new Rescue Bots to carry out the mission of protecting and rescuing humans from various emergencies; both natural and of their own making.
At the conclusion of Rescue Bots, the Rescue Bots team had been dispersed around the world on various assignments by Autobot leader Optimus Prime (Peter Cullen in that series). Rescue Bot leader Heatwave (Paul Guyet) was left in charge of the academy and training the new recruits. However, his teammates—police bot Chase (Frank Cwiklik), helicopter bot Blades (Michael Hansen) and construction bot Boulder (Keyon Williams)—would pop in from time to time to teach classes based on their particular interests or areas of expertise. Other faculty members would come to include headstrong and reckless T-Rex dinobot Grimlock (Terrence Flint), sometimes joined by his friends and fellow dinobots Apatosaurus Sludge (Billy Bob Thompson), stegosaurus Snarl (Mark Ashton), and velociraptor Slash (Alex Hairston); ambulance bot Rachet (Todd Perlmutter), a chief medical officer; science expedition vehicle/bot-sized microscope Perceptor (Jeremy Levy), a science and intelligence officer; and elite Autobot operative and sports car Bumblebee (Levy); as well as Optimus (Hiro Diaz in the pilot, Jake Tillman after reprising the role from Cyberverse) himself. Additionally, a robotic crash test dummy with a limited A.I., named Tough Luck Chuck (Perlmutter), served as a stand-in for human victims in holographic rescue simulations.
Comprising the academy’s first class was Whirl (Courtney Shaw), a police helicopter with an enthusiastic love of learning and rules; Hoist (Alan Trinca), a tow truck that was an aspiring inventor and mechanic (he created new tool attachments for he and his teammates to use); Medix (Adam Adrianopolous), an emergency response car who dealt purely in logic; and Wedge (Mason Hensley), a payloader that was created as a Decepticon until he was recruited by Optimus, and who had a tendency to geek out over his idol, Bumblebee. Optimus would also go on to recruit Hot Shot (Pierce Cravens), an ATV who was primarily proficient at playing the game of Cube on Cybertron. Hot Shot, with an attitude to match his name, had a hard time fitting in with the other rescue recruits but gradually found his place among them. Optimus bestowed upon him an ancient Cybertronian artifact known as the Mul-T-Cog, which allowed him to assume the additional forms of a jet plane and a hovercraft, but initially restricted him to only being able to change into one vehicle form per day. These recruits were based on characters that had appeared previously, but received significant changes to their overall designs and personalities for the series. 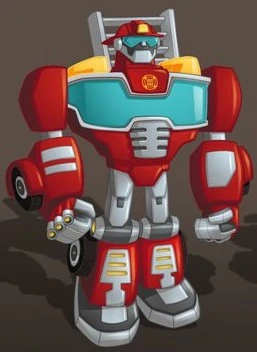 Although set in the same continuity as Rescue Bots, Rescue Bots Academy had a number of changes made in its production. For starters, the series wasn’t produced by longtime Hasbro partner, DHX Media (now WildBrain). Instead, it was done by Boulder Media Limited, an animation studio Hasbro took over outright to work on all of their media projects. Rescue Bots Academy was the first Transformers series they began work on, but it ended up being released after the second: Cyberverse. While the designs on previously established characters were similar, there were notable differences in the proportions of their bodies, boot-like feet and designs of their optics (aka eyes, which went from being tiny orbs in a void to orbs more akin to human-like eyes). Other characters, like Bumblebee, were represented in their “evergreen” design: a unified design choice Hasbro implemented for the toyline that didn’t tie them into any particular iteration of the franchise, allowing them to remain on shelves for longer periods. The recruits were also rendered as being shorter than the other Bots. The characters were designed by Keith Byrne.
One major difference was the diminished role of human characters in the series, with a greater focus placed on the Bots and their training. In Rescue Bots, the Bots operated on the small island of Griffin Rock, Maine in partnership with the Burns family--a family of rescuers tasked with keeping the citizenry safe before and since the Bots arrived--before building the academy on the mainland. Only the youngest of the Burns family, Cody (Andy Zou), ever appeared on the show; depicted as older and studying to be a paramedic (his father, however, was mentioned and represented as a bust in Heatwave’s office and his ancestor in statue form). At the end of Rescue Bots, the Bots’ human partners were also assigned to accompany them on their respective missions. The academy itself was controlled by an A.I. named Elma (voiced by Kath Soucie), modeled after a noted scientist, which was completely absent from the show. As the series progressed, other humans began to make appearances including Cody’s best friend Frankie Greene (Kaitlin Becker); her father and resident scientist Doc Greene (Guyet); accident-prone truck driver Jerry (Perlmutter); helicopter-helmeted Mr. Harrison (Levy); frequent citizen in distress Mrs. Rubio; reporter Huxley Prescott (Perlmutter); bumbling Mayor Luskey (Guyet); and reformed twin tech-thieves turned tech-inventors Evan (silent) and Myles (Perlmutter). A new human character, Wes (Xander Crowell), was introduced as a Teen Pioneer (the Griffin Rock version of Scouts) who idolized Wedge. As the production utilized a non-union New York-based voice cast, none of the returning characters could be voiced by their original actors.
Transformers: Rescue Bots Academy debuted on Discovery Family on January 5, 2019 after the first to episodes aired as a sneak peak on December 8. Originally, the series was set to debut in the fall of 2018, but a poster released that October indicated the push back. Unlike its predecessor, the series was comprised of 11-minute episodes, with two airing each half hour. It was aired in an hour-long block, with reruns of the previous week’s episodes making up the second half (after the initial debut, which aired four all-new episodes). The series was developed and written by Transformers veteran Nicole Dubuc, who also served as story editor, executive producer and wrote the theme song. Fellow veterans Brian Hohlfeld , Kevin Burke and Chris “Doc” Wyatt also wrote for the series, with Burke and Wyatt serving as executive producers. Additional writers included Jodi Reynolds, Ciarán Morrison, Mick O’Hara, Nathan Cockerill, Marc Seal, Danny Stack, Ben Ward, Fionn Boland and Peter A. Dowling, who was also a story editor. The theme was composed by Doug Califano and performed by Zach Allen. The rest of the series’ music was composed by Califano, Stuart Kollmorgen, Kieffer Infantino and Matt Mahaffey.
Renewed for a second season, the dynamic of the series was changed slightly by pairing up the recruits with teacher tutors: Whirl with Chase, Medix with Blades, Wedge with Bumblebee, Hot Shot with Heatwave, and Hoist with Grimlock (which did wonders for his fear of dinosaurs). Four additional Mul-T-Cogs were discovered and given to the recruits, allowing Whirl to become a squad car; Hoist to become a dinobot after Grimlock; Medix a rescue helicopter; and Wedge a sportscar after Bumblebee. Hot Shot gained a new firetruck form after Heatwave, and was able to master his Cog so that he could transform into any form without restriction. The recruits also received new tools chosen by their spark via the Sparksayer, an ancient Cybertronian relic: Hoist gained a plasma cutter, Medix a magnetic power projector, Whirl a polyvisor that allowed her to examine things more closely, Wedge an auger, and Hot Shot a combicannon used by mixing and projecting compounds.
In 2020, word came that production on Rescue Bots Academy had concluded, with series director Pete Slattery announcing on his Twitter that the series was ending with the second season. The series left with an open ending, seeing the recruits graduate their second year while Slash, Sludge, Snarl, bird-like reformed Decepticon Laserbeak (giving the series a larger presence of Decepticons than its predecessor), and Brushfire (Bimini Wright), an Autobot that had been operating independently in Australia, were invited to join the academy as new first year students. Additionally, the academy had received a recent expansion when Cybertronian Titan Citadel Secundus (Cwiklik), a city-sized transformer, ended his centuries-long exile in space and came to reside on Earth as a new wing to the school. Although it ran fewer seasons, the series ended with 104 episodes just like its predecessor. Its conclusion also marked the end of what was known as the “Aligned continuity family”, an era of the brand launched in 2010 unified under a 354-page brand bible detailing the history and backstories of the universe.

The Rescue Bots Academy toyline included many figures that were reworkings of earlier releases in the Rescue Bots series. The first two figures in 2018 were part of the smaller-sized Rescan toyline. VTOL Hot Shot and Snow-Plow Wedge were included as part of the original Rescue Bots line with Academy just being added to the packaging. They were reworked versions of previous Bumblebee and Boulder figures, respectively. The next two figures, hovercraft Hot Shot and Medix, received all-new packaging for Academy. This Hot Shot was a reworking of Heatwave’s fireboat mode. The official Academy line began in 2019 and featured 8 waves of figures; 3 of them featuring repeats of previous figures. A multi-pack without Medix was released in 2019, and a triple pack of Bumblebee in three forms was released in 2021. Three waves of large-sized features were released beginning in 2019, featuring only the new recruits across them. Hoist and Wedge received Command Center figures with light-up tools and command center trailers. As part of the Flip Racers line, Optimus was released as a launcher trailer with his own figure and as a jumbo jet with Bumblebee, and Bumblebee was released with Hot Shot. Only Whirl received her own separate figure in the line. 12” figures of Hot Shot, Bumblebee and Heatwave were also released. In 2019, a wave of blind bag figurines were released dedicated to the characters from the show.