THE HISTORY OF TRANSFORMERS 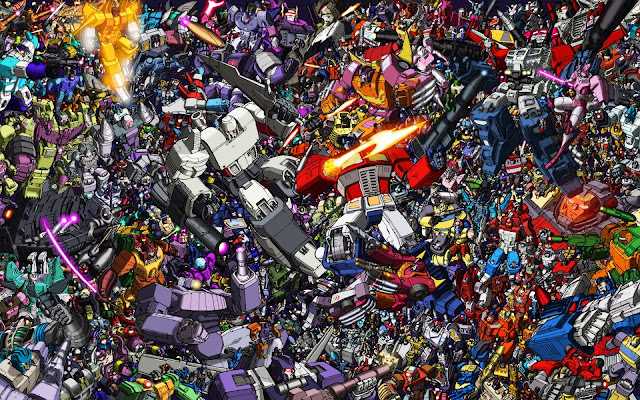 In 1983, Hasbro representatives were sent to the Tokyo Toy Show in Japan to find new properties that they could import to the North American market. Toy manufacturer Takara (now Takara Tomy) was showcasing several of their transforming robot toy lines: Micro Change, a subset of their Microman line which featured robots that disguised themselves as action figures on Earth, and Diaclone, which had transforming vehicles and robots piloted by figures spun out of the Microman line. Hasbro bought the rights to the toys and partnered with Takara to bring them overseas (Diaclone was available there before, but only in specialty toy stores).

Rather than risk confusing consumers with multiple similar toys, Hasbro decided to combine the Microman and Diaclone lines into a singular concept as Transformers. Having found success with G.I. Joe: A Real American Hero through their partnership with Marvel Comics, Hasbro went back to the publisher with the task of creating a storyline for the toys as well as fleshed out characters. Then editor-in-chief Jim Shooter and writer Dennis O’Neil created the story, while editor Bob Budiansky developed the majority of the characters.

Transformers followed two warring factions of sentient alien robots from the planet Cybertron: the heroic Autobots and the evil Decepticons. Both sides could change from humanoid forms into various objects such as vehicles, devices and even animals. When the war had decimated Cybertron and made supplies scarce, the Autobots left the planet to find a new home with the Decepticons in pursuit. Both of their ships crash-landed on the planet Earth where they were rendered inert for millions of years. In 1984, a volcanic eruption led to the reactivation of the Autobots’ ship, which proceeded to repair the robots and give them new forms based on human technology in case humans turned out to be hostile. The Decepticons were also revived, and the war began anew with Autobots taking on the additional task of ensuring humanity’s safety and that Earth doesn’t suffer Cybertron’s fate.

On the Decepticon side, they were led by the sinister Megatron, who could change into a Walther P38 handgun, a particle beam cannon, or a telescopic laser cannon. Under his command was communications expert Soundwave, who became a microcassette modeled after a Sony Walkman; spy Buzzsaw, a condor; interrogation expert Laserbeak, also a condor; saboteur Ravage, a jaguar; demolitions expert Rumble, yet another condor; and warriors Skywarp and Thundercacker, both of whom became F-15 Eagle fighter jets along with their commander, Starscream.

The first series of Transformers came with a mix of regular-sized figures and mini-figures. To save on production costs, Hasbro reused the designs for the characters with different paint or accessories (which is why there were so many condors, F-15s, and duplicate car models). As production of the line continued over the years, this practice began to become rare as each character got their own unique design; expanding from the initial Takara toy lines by licensing molds from other toys or by creating unique ones. Various themed subgroups also began to appear.

Further emulating their marketing strategy from G.I. Joe, Hasbro commissioned Marvel to publish a comic series to showcase the story and help promote the toys. Initially, Transformers was to be a 4-issue limited series, but continued for 80 issues before it was cancelled (the final issue featured the tagline “80 in a 4-issue limited series”). Budiansky wrote a good portion of the books. Overseas, Marvel UK ran their own series for 332 weekly issues that featured new stories amongst reprints of the American book. Simon Furman was the predominant writer of the new UK material, and his storytelling style led to him succeeding Budiansky as the writer of the American comic for the latter portion of its run. Both series spawned spin-offs and specials.

The third portion of the marketing strategy involved having Marvel Productions and Sunbow Productions produce an animated series. Debuting in syndication on September 17, 1984, Transformers ran two seasons before taking a hiatus in 1986 for Transformers: The Movie. The Series returned following its events for a third and abbreviated fourth season before Sunbow lost the rights to the franchise.


While the toys proved popular during the 80s, their popularity didn’t last nearly as long as G.I. Joe’s as the 90s approached. By 1991, Transformers were no longer being sold in North America even though they continued in European markets. Eventually, the continued European sales encouraged Hasbro to try again and gave the franchise its first rebirth by rebranding it “Generation 2”. The new Transformers line debuted in 1993 along with a new animated series (which were repackaged and re-edited episodes of the original with new CGI elements), a new Marvel comic picking up from where the original left off, and a new short-lived comic overseas published by Fleetway (Marvel UK had folded by then). Generation 2, however, failed to improve Transformers’ standing in the American market, prompting Hasbro to give it a third try by handing production of the line over to their newly-acquired Kenner division, as well as developing new cartoons; some of which wound up on Saturday mornings…