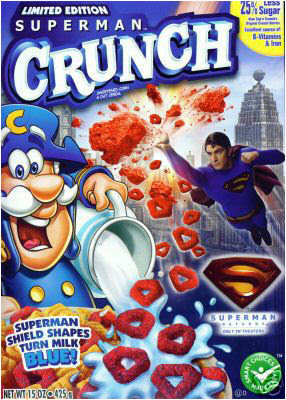 2006 marked Superman’s triumphant return to the big screen. Or, at least it was supposed to be.

Since the original movie series starring Christopher Reeve, Superman had been noticeably absent from film adaptations in the following years. In the late 90s, an attempt known as Superman Lives starring Nicolas Cage and directed by Tim Burton was in production, but the commercial failure of Batman & Robin caused Warner Bros. to cancel the project and instead channel the funds into the Will Smith vehicle Wild Wild West.

In 2004, Warner Bros. was moving forward with Superman: Flyby directed by McG and written by J.J. Abrams. When McG dropped out of the project, they approached director Bryan Singer to pitch an idea he had conceived of during the production of X2: X-Men United with Michael Dougherty and Dan Harris. Warner Bros. liked the pitch, and Singer signed on to direct Superman Returns with Brandon Routh in the lead role.

As part of the movie’s promotion, Warner Bros. entered into a partnership with Quaker Oats to produce a cereal tie-in for the movie. Rather than create an all-new cereal, Quaker went to its stalwart Cap’n Crunch brand and created a special Superman edition called Superman Crunch. It tasted like Peanut Butter Crunch but featured Superman shield-shaped pieces that turned the milk they were in blue, despite being red themselves. The commercial played up this fact, with the Cap'n and two kids having to save the color blue from an unseen Lex Luthor.

The box featured images of the principal cast amongst a small board game on the back panel, as well as information for an instant win game. The front of the box showed Routh’s Superman punching a falling meteor to create the shield shapes for the cereal. On the side panel, Quaker advertised its other Superman tie-in products including Life Cereal, Chewy Granola Bars and Pasta Roni.

The cereal had a short run while the movie found critical and commercial success. However, plans for a 2009 sequel were abandoned due to Warner Bros.’ unhappiness with the overseas box office take of the film. The Superman franchise would be rebooted in 2013 with Man of Steel.
Posted by Chris Buchner at 8:02 AM