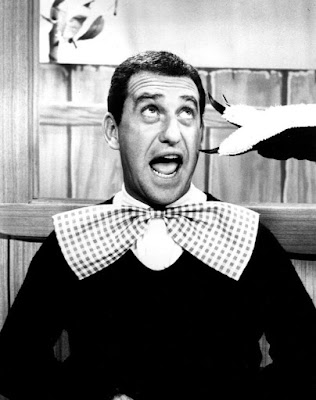 Born Milton Soupman, he adopted the stage name “Soupy Hines” from his childhood nickname of “Soup Bone”. He later changed it to “Sales” after vaudeville comedian Chic Sale as “Hines” made him sound too similar to the Heinz soup company. Sales abandoned his interest in journalism to become a writer and disc jockey for WHTN (now WVHU) in Wet Virginia while also doing a comedy routine in clubs. After DJing in Cincinnati, Sales went into television in 1950 as the host of Soupy’s Soda Shop, TV’s first dance television program, followed by the talk show Club Nothing that showcased his zany brand of comedy. In 1953, he began The Soupy Sales Show on Detroit’s ABC-affiliate WXYZ-TV. Convinced by colleagues who performed as clowns on television, Sales opted to abandon anonymity (and the ability to be easily replaced) and chose a costume comprised of a sweater, a top hat and an oversized polka-do bowtie. WXYZ expanded his work with the daily daytime kids’ show 12 O’Clock Comics, later renamed to Lunch With Soupy Sales as he always ate lunch with his audience, and the late-night show, Soupy’s On. ABC offered Sales the Saturday slot on the network for Lunch. Sales continued to do variations of his show until 1966, with a revival attempt in 1979. Sales appeared in guest spots on various programs, usually as himself but sometimes playing another character, minor roles in several movies, and eventually carved out a second career as a recurring guest on a variety of game shows; including being a regular on the revival of What’s My Line? and hosting Junior Almost Anything Goes. In 1983, he starred in his first cartoon as the titular character of the Donkey Kong segment of Saturday Supercade. Sales returned to radio on WNBC in New York from 1985-87. He died in 2009 from cancer.