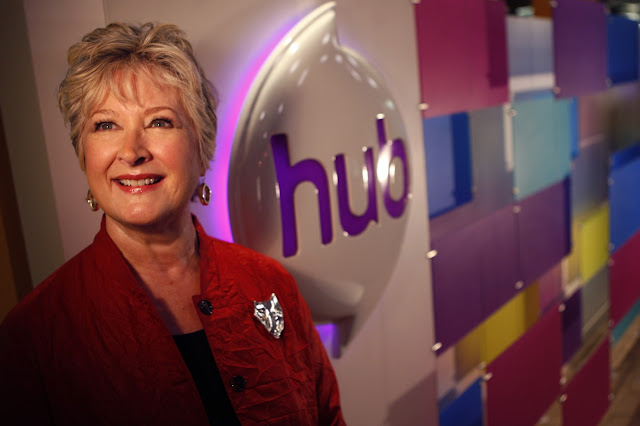 Initially studying political science at the University of Southern Mississippi and international relations and urban development at Louisiana State University, Loesch ended up as a clerk-typist for ABC in 1971. After hours, she’d stay with the film editors where she was shown their processes. She would eventually get a full education on production when promoted to the promo department developing sales films and on-air promos. In 1979, a former ABC colleague invited her over to NBC to work as a manager in the children’s programs department. While her efforts went unappreciated at the network, Hanna-Barbera liked her style and invited her to work for them any time she wanted. Loesch took them up on the offer and they created the position of head of children’s programs, later executive vice president. With them, Loesch would end up providing NBC with one of their biggest Saturday morning hits: The Smurfs. In 1984, Loesch moved further up the ladder when she was offered the position of president and CEO of Marvel Productions. That move allowed her to achieve the often-refuted goal of adapting Kermit the Frog for animation when CBS’ Judy Price wanted to commission the show Muppet Babies. Although Marvel was able to churn out several programs based on Hasbro properties—My Little Pony, G.I. Joe, A Real American Hero, Transformers and Jem—it was an uphill battle to get any of Marvel Comics’ own properties to the small screen; especially the X-Men. In 1990, Loesch joined the Fox subsidiary Fox Children’s Network as its division president. There, she oversaw the launch and development of the successful programming block Fox Kids. She was able to translate that success into finally getting X-Men: The Animated Series onto the airwaves, as well as Mighty Morphin Power Rangers (which Marvel Productions tried to option years prior in its original Super Sentai form)—both tremendous hits for the network. After Saban Entertainment took ownership of the division in 1997, Loesch went to work for the Jim Henson Television Group where she oversaw the conversion of the Odyssey Channel into the Hallmark Channel. In 2003, Loesch and Bruce Stein formed The Hatchery, LLC, a media production company owned by American Greetings and Mandalay Entertainment focused on family-oriented entertainment. They would produce Dan Vs. and R.L. Stein’s The Haunting Hour for The Hub; a joint venture between Hasbro and Discovery Communications. Loesch was appointed chief executive officer of the network, where she remained until stepping down in 2014. In 2015, Loesch was named to Genius Brands’ international board of directors, replacing president and COO of American Greetings Jeff Weiss. The following year, she became the executive chairman of the Kids Genius Channel, which became Kartoon Channel in 2020. Loesch had also served on the board of trustees for Sesame Workshop, makers of Sesame Street, and is the vice chair of the Emmy Foundation.

(Note: Below are just where on-screen credit was received. As the head of respective networks, she had some kind of involvement with all of their output during her tenure.)
The All-New Popeye Hour
Drak Pack
The Flintstone Comedy Show
The Richie Rich/Scooby-Doo Show
The Fonz and the Happy Days Gang
The Kwicky Koala Show
Space Stars
Laverne & Shirley in the Army
Trollkins
The Smurfs
Superfriends (1981)
Pac-Man
The Dukes
Benji, Jax & the Alien Prince
The New Scooby-Doo and Scrappy-Doo Show
The Biskitts
Superfriends: The Legendary Super Powers Show
The New Scooby-Doo Mysteries
Jim Henson’s Muppet Babies
Dungeons & Dragons
Jim Henson’s Little Muppet Monsters
Jem
Little Clowns of Happytown
The Little Wizards
Fraggle Rock: The Animated Series
RoboCop (1988)
Dino-Riders
ABC Weekend Specials (episodes)
Rude Dog and the Dweebs
Cartoon All-Stars to the Rescue
X-Men: The Animated Series
Posted by Chris Buchner at 8:01 AM