For the history of Archie, check out the post here.

From the late 60s through the 70s and the late 80s, Archie and his friends had a good run on Saturday morning television. They were everyday high school kids with a band, hosts of a variety show, managers of a television station, historical figures and even middle school kids. For their last Saturday outing in the 20th Century, DiC Entertainment decided to put the Archie kids up against the paranormal in a blending of the X-Files and Scooby-Doo concepts.

Archie’s Weird Mysteries was centered around the idyllic town of Riverdale at a time when it was invaded by some unexpected and unwanted visitors. A lab accident at Riverdale High caused Riverdale to become a magnet for monsters, aliens and the supernatural. Archie Andrews (Andy Rannells), a reporter for the Riverdale High newspaper, took it upon himself to investigate the weirdness around town and often dragged his skeptical friends Betty (America Young), Veronica (Camille Schmidt), Jughead (Chris Lundquist), Reggie (Paul Sosso) and Dilton (Ben Beck) into it. The show featured a collection of Archie supporting characters, including Principal Waldo Weatherbee (Tony Wike), teacher Geraldine Grundy and local food slinger Pop Tate (Ryle Smith), as well as some new characters in Archie’s supernatural advisor, Dr. Beaumont (Jerry Longe), and Lucinda, who practiced voodoo magic and made potions. Each episode opened with a brief description of the plot and a montage of scenes in a frame that resembled a newspaper.

Archie’s Weird Mysteries became the first new offering for the fledgling PAX (now Ion Television) network’s Saturday morning line-up when it debuted on October 2, 1999, accompanied before and after by infomercials. However, PAX removed it from their schedule after the first 14 of the 40 produced episodes aired. The remainder of the episodes was seen on weekdays and in syndication. Because each episode had a built-in lesson, the show was deemed to meet the FCC’s educational and informational children’s programming requirements and was used by various networks to fulfill their obligations. The series was written by Michael Patrick Dobkins, Brian Swenlin, Jymn Magon, Don Gillies, Phil Harnage, Frank Santopadre, and James W. Bates and was produced by DiC’s French subsidiary, Les Studios Tex.. The theme was written and performed by Mike Piccirillo, who also scored the series with Jean-Michel Guirao.

To tie into the series, Archie Comics produced an ashcan-sized comic with the same name in 1999, written by Paul Castiglia with art by Bill Golliher and Rich Koslowski. It served as a prelude to an ongoing series that debuted in 2000, with a majority of the art being handled by Fernando Ruiz. The comic featured both original stories and adaptations of some episodes. After the show was cancelled, the “Weird” was removed from the title and the format changed to reflect the Archie gang being taught forensics by two crime scene investigators and their using those skills to solve more mundane mysteries. The comic was eventually cancelled with issue 34. Various issues were later collected in 2011 as part of the Archie and Friends All-Stars series of trade paperbacks.

In 2000, Universal Studios combined the Riverdale vampires story arc, “Scarlet Night”, “I Was a Teenage Vampire” and “Halloween of Horror”, into a single movie and released it to VHS as Archie and the Riverdale Vampires. Anchor Bay Kids Entertainment acquired the United Kingdom rights and released eight episodes over two volumes on DVD. In 2005, Boulevard released four episodes over two discs, while MRA Entertainment released 18 episodes across six volumes in Australia. In 2008, North America finally saw a DVD release of the series when DHX Media released two four-episode collections called The Haunting of Riverdale and Spells Spell Trouble!. In 2011, Gaiam Entertainment released Saturday Morning Cartoon Classics; a compilation of various former DiC properties that included several episodes of Weird Mysteries. In 2012, Mill Creek Entertainment produced a complete series DVD set as well as a 10-episode Best Of collection on the same day and the episode “Halloween of Horror” as part of the compilation DVD, Cookie Jar Halloween Cartoon Collection. 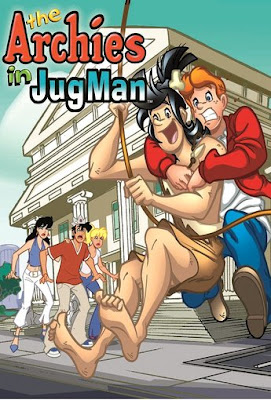 In 2002, a semi-sequel movie was produced for Nickelodeon’s Sunday Movie Toons. The Archies in Jugman featured the same actors and basic character models, although they were given new outfits. It followed the Archie gang as they pursued a defrosted caveman that resembled Jughead. MGM Home Entertainment released the film to VHS and DVD shortly after its premiere, with Gaiam re-releasing it in 2008 on DVD along with the other Sunday Movie Toons as both a standalone film and paired with Inspector Gadget’s Last Case.

EPISODE GUIDE:
“Attack of the Killer Spuds” (10/2/99) – Jughead wins a potato that turns out to be part of the plot for a potato to conquer the Earth by enslaving humanity.

“Driven to Distraction” (10/9/99) – There’s something peculiar about the fuzzy dice Archie purchased for his car.

“Me! Me! Me!” (10/16/99) – An ancient artifact brings Veronica’s wish of everyone being more like her to fruition—and she doesn’t like the results.

“The Haunting of Riverdale” (11/6/99) – The ghost of a dedicated librarian haunts the library where she once worked until her job is finally completed.

“Fleas Release Me” (11/20/99) – Reggie’s prank at playing werewolf may be a lot closer to the truth than he realizes.

“Virtually Evil” (12/4/99) – Besting Reggie in a new virtual reality game leads Archie to become as big a braggart as Reggie ever was.

“Zombies of Love” (12/11/99) – Veronica’s love potion goes out of control when it attracts more than just Archie.

“Monster in the Night” (12/31/99) – Investigating a strange strongman in town leads Archie to discover something sinister with a new energy drink.

“Mega-Mall of Horrors” (1/7/00) – The owner of the new mall gives kids a credit card each to go wild, but their purchases will cost more than money.

“Ship of Ghouls” (1/20/00) – A medallion makes Reggie obsessed with retrieving an underwater treasure from the ghouls guarding it.

“Something is Haunting Riverdale High” (1/21/00) – Midge, Dilton and Ethel go missing, and only a lab accident leads Archie to discovering where they went.

“It Lives in the Sewers” (1/26/00) – Jughead loses his pet while a toxic waste spill in the sewers leads to the creation of a monster.

“Green-Eyed Monster” (1/28/00) – Betty and Veronica determine there’s something off about the new exchange student who has her sights set on Archie.

“Cinemadness” (1/31/00) – Accompanying Jughead to the movies leads Reggie to falling in love with the film’s star.

“Beware of the Glob!” (2/1/00) – Miss Beazley accidentally mixes one of Dilton’s formulas into her tapioca pudding, causing it to grow into a ravenous monster.

“The Day the Earth Moved” (2/2/00) – Archie’s family tradition may be the key to saving Riverdale from a giant worm.

“Dance of the Killer Bees” (2/3/00) – Prom plans are put on hold when Ethel has to save the school from a swarm of killer bees.

“The Christmas Phantom” (2/8/00) – Archie ends up trapped in a department store with a monster.

“Scarlet Night” (2/9/00) – Veronica discovers she’s a great slayer that will remove the vampires from Riverdale, including new student Scarlet who has her sights set on Archie.

“I Was a Teenage Vampire” (2/10/00) – Scarlet helps her master, Count Medlock, fulfill a prophecy to bring about eternal night.

“Halloween of Horror” (2/11/00) – The vampires return and crash the Lodge’s Halloween party.

“Alternate Riverdales” (2/15/00) – Older Vinnie breaks his younger self out of prison and sets about taking his revenge on Archie by changing time.

“Invasion of the Cockroaches” (2/17/00) – Pop tries to cater to an adult clientele but ends up needing his former teen patrons in order to deal with the adults when they change.

“Big Monster on Campus” (2/22/00) – Archie investigates Central High’s star athlete, whom he thinks is just a bit TOO good.