THE ADVENTURES OF BRISCO COUNTY, JR.

After the success of Indiana Jones and the Last Crusade, FOX executive Bob Greenblatt approached Jeffrey Boam and Carlton Cuse, who had worked on the story and development of the film, to develop a television series with a similar style. Taking inspiration from serials like the movie had, Cuse and Boam combined the most common genres—Westerns and science fiction—with a healthy dose of comedy to bring The Adventures of Brisco County, Jr. to screens. The series focused on lawyer-turned-bounty hunter Brisco County, Jr. (Bruce Campbell) being hired to track down and recapture John Bly (Billy Drago) and his gang. The Bly Gang was responsible for the murder of his father, Marshall Brisco County (R. Lee Ermey). Bly was on the hunt for a mysterious Orb of supernatural power, which he sought to use to conquer his home—in the future. Aiding Brisco was fellow bounty hunter, Lord Bowler (Julius Carry), and his employers’ liaison, Socrates Poole (Christian Clemenson), as well as his incredibly smart horse, Comet (Copper, Boss, Ace Strip & Comet). 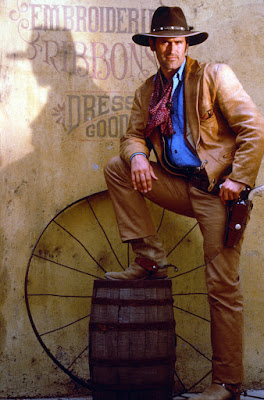 The show made use of anachronistic technology to enhance the humor, aided by inventor Professor Albert Wickwire (John Astin), had its act structure broken up by cliffhangers and titles to further emulate the serials that inspired it, and took a different approach to Westerns by having Brisco use his mind to escape trouble over his gun (he typically shot it at objects rather than people when he did use it). Despite a strong push by the network, the series was ultimately doomed by being shown in the Friday night death slot and was cancelled amidst poor ratings after a single season. The show has gone on to have a loyal cult following, and after extensive requests by fans was finally given a DVD release in 2006. The series’ theme, composed by Randy Edelman, went on to be used by NBC for their coverage of the 1996 Olympics and the 1997 World Series.
Posted by Chris Buchner at 8:02 AM