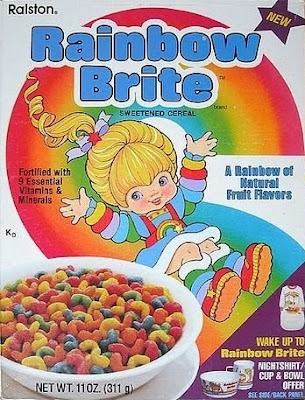 In the early 1980s, Hallmark Cards wanted to break into the licensing business with the creation of characters marketed towards children. Garry Glissmeyer, Vice President of Creative/Licensing, and Lanny Julian, Vice President of Sales and Marketing, were tasked with overseeing the creation of Hallmark’s franchise. Glissmeyer came up with the concept of a young girl who had power over nature, which gradually evolved into her being responsible for all the colors of the universe.

A team of artists led by Cheryl Cozad, along with Editorial Director Dan Drake, fleshed out the characters and concepts behind the idea. G.G. Santiago developed the final look for the character that would become Rainbow Brite. Hallmark introduced the character on their cards and other merchandise in 1983. With style guides completed for all future licensing opportunities, it was time to bring Rainbow Brite and her friends to the masses. Julian selected Mattel to produce toys based on the character, while DiC Entertainment would create a syndicated animated series to promote the toys.

Hallmark writer Mary Loberg and freelance television writer Woody Kling worked with DiC to develop the storylines for the series. The premise followed a young girl named Wisp (Bettina Bush) who found herself in a gray, desolate land. She found the legendary color belt which allowed her to rescue the trapped seven Color Kids: Red Butler (Mona Marshall), Lala Orange (Robbie Lee), Canary Yellow (Marshall), Patty O’Green (also Marshall), Buddy Blue (Pat Fraley), Indigo (Lee) and Shy Violet (also Lee). Together, they defeated the King of Shadows and brought color back to the land, with Wisp being made the leader of the Color Kids and renamed Rainbow Brite.

The Rainbow Brite series made its debut with a primetime special, “Peril in the Pits”, on June 27, 1984. It was followed by two more two-part adventures before going on a year-long hiatus. To bridge the gap, a theatrical film, Rainbow Brite and the Star Stealer, was also produced by DiC and released by Warner Bros. on November 15, 1985. The film focused on The Dark Princess (Rhonda Aldrich) attempting to steal the Spectra gem, diminishing the Color Kids’ powers and causing Rainbow to be unable to change the seasons on Earth. It was poorly reviewed and largely dismissed as nothing more than a long commercial for the toys.

Ralston acquired the license to produce a cereal as part of the promotion for the film. Rainbow Brite Cereal featured fruity-flavored pieces in the shapes of monotoned rainbows. The original box introduced the world of Rainbow Brite to the eater on the back panel. Subsequent panels featured the various promotions and premiums the cereal had including stickers, a night shirt and bowl set, a Crazy Chain that featured plastic goofy charms, a kite, a poster and savings on toys. The cereal had an impressive lifespan for a licensed cereal, staying on shelves for five years before it was discontinued.

DiC produced a commercial for the cereal using the same animation style as a typical episode of the Rainbow Brite series. It featured series villains Murky (Peter Cullen) and Lurky (Fraley) attempting to remove the color from Rainbow’s new cereal as she enjoyed it with Brian (Scott Menville), the only human that could see Rainbow and her friends. But, the cereal proved too powerful and left the villains covered in color instead.
Posted by Chris Buchner at 8:03 AM