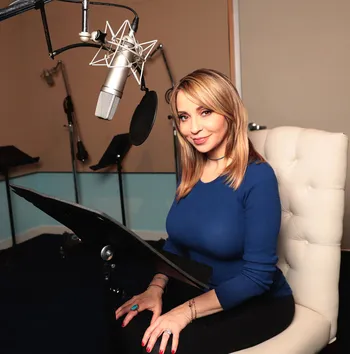 Born and credited as Tara Charendoff until her marriage, Strong became interested in acting at age 4 when she volunteered to perform in a school production. She worked with the Yiddish Theater and Toronto Jewish Theater and was featured in a recording of “Lay Down Your Arms” with the Habonim Youth Choir, singing the song in both English and Hebrew. Her professional debut was at the age of 13 when she starred as Gracie in Limelight Theater’s production of The Music Man. Along with a guest-spot on the show T. and T., she landed her first animated lead role in Hello Kitty’s Furry Tale Theater. By the time she moved to Los Angeles, she had already amassed an impressive resume; a trend that would continue well into her career. Largely, her work has been in animation, but Strong has made frequent on-camera appearances, most recently in 2021 as Tiggy Sullivan on Pretty Hard Cases, as well as done video games, such as playing the protagonist of Lollipop Chainsaw, Juliette. Often, Strong gets called on to play young boy characters like 10-year-old Ben Tennyson in the Ben 10 franchise, Dil Pickles in the Rugrats franchise (excluding the Paramount+ reboot) or Timmy Turner in The Fairly Oddparents.  She inherited the role as the regular voice of DC Comics’ Harley Quinn from Arleen Sorkin (in addition to already playing Batgirl), and became part of the phenomenon that was My Little Pony: Friendship Is Magic as lead character Twilight Sparkle. She often uses her fame and social media presence to promote animal rescue groups, raise money for charities, decry bullying and promote Veganism. Throughout her career, she has been nominated for numerous awards including Action on Film International Film Festival, Annie Awards, Behind the Voice Actors Awards, Daytime Emmy Awards, Kids’ Choice Awards, NAVGTR Awards, Online Film & Television Association, Spike Video Game Awards, a Hollywood Gold Award, and an Academy of Interactive Arts & Sciences Award; winning several of them.