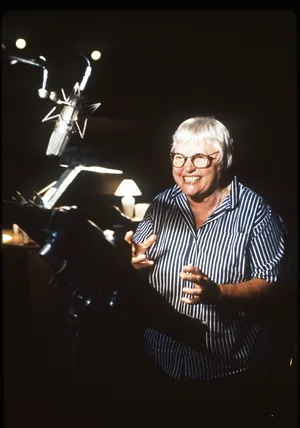 Patricia Ann Carroll’s career began in 1947 when she landed the role of Lorelei Crawford in the film Hometown Girl. She made her television debut in 1952 on The Red Buttons Show followed by her Broadway debut in 1955 in Catch a Star!; the latter of which landed her a Tony Award nomination. Along with appearing on a number of variety and game shows from the 1950s through the 1970s, she had a regular stint on the sitcom Make Room for Daddy as Bunny Halper, Getting Together as Rita Simon, Pearl Markowitz on Busting Loose, Mrs. Hope Stinson on the finale season of Too Close For Comfort and Gussie Holt on She’s the Sheriff; all while still appearing on stage and in film. In 1963, Carroll sued Hanna-Barbera for breach of contract after she was cast as Jane Jetson in The Jetsons and was replaced after only recording a single episode of the 24 that were guaranteed. Her voice acting debut instead game in 1966 as she provided some in The Super 6. In the late 1980s she returned to voice acting as teacher Ms. Biddy McBrain in Galaxy High School, dog Hazel in Foofur, and antagonistic dog pound owner Katrina Stoneheart in Pound Puppies. She also played the feisty grandmother of Jon Arbuckle (Thom Huge) in two Garfield holiday specials. She landed the role of sea witch Ursula in Disney’s The Little Mermaid; a role she would continue to inhabit in the majority of the character’s English-language appearances until 2020 (excluding live-action adaptations in Once Upon a Time, Descendants 2 and The Little Mermaid Live!). Carroll died of pneumonia in 2022 at the age of 95.