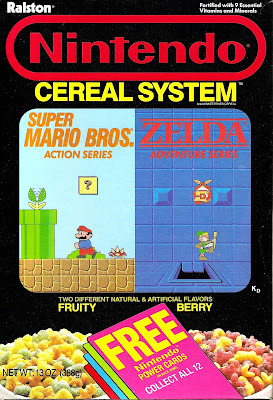 In 1985, Nintendo brought its Famicom gaming system over for Japan and dubbed it the Nintendo Entertainment System. Boxed with it was the second game in the spin-off series starring Donkey Kong’s Mario: Super Mario Bros. The system, and game, became hits as kids helped Mario and his brother Luigi rescue the Mushroom Kingdom from the evil reptilian Bowser and his minions.

Nintendo’s next hit came the following year with the Japanese release of The Legend of Zelda as one of the launch titles for Famicom’s new Disk System. Created by the same people who produced Mario, the game featured a young boy named Link who sought to protect the kingdom of Hyrule from the evil Ganon by uniting the pieces of a powerful artifact known as the Triforce. Who’s Zelda? She’s the princess in distress Link is often tasked with rescuing. When it was released in America in 1987, it became the first Nintendo game to sell over a million copies. The sequel was released in Japan in the following months and in America in late 1988.

With two hit games, Ralston saw an opportunity to give the best of both worlds. Acquiring the license to both franchises, in 1988 Ralston produced a fruity cereal for Mario and a berry cereal for Zelda. Mario’s cereal featured shapes representing Mario, Bowser, Super Mushrooms and the two common enemies Goombas and Koopa Troopas. Zelda’s cereal featured Link, health hearts, boomerangs, keys and shields.

But the most unique aspect of the cereals was that Ralston combined them both in a single box. Dubbed the Nintendo Cereal System after the NES console, each box contained the cereals in their own separate bag inside and a perforation along the top flap allowed you to pour out one at a time. The boxes depicted several scenes from both the originals and sequels of both franchises, although in drawings meant to mimic the graphics rather than actual screenshots. During Ralston’s promotional offer for a hologram t-shirt, the box joined the others in Ralston’s line with special holograms of Mario and Link in place of the usual box art.

The cereal’s commercials were the first animated effort to feature the new Super Mario design for Mario and the first for Zelda, a year before they received their animated series as part of The Super Mario Bros. Super Show! The commercial also made use of Koji Kondo’s score for the underground levels of the original Super Mario with lyrics talking about the cereal.

A regular feature of the box was the offering of tips for both franchises’ games on the side panel. The cereal also came with a variety of premiums, including 12 different trading cards to cut off the back of the box, a mail-away poster of either franchise, stickers, an iron-on transfer for clothing, a miniature pinball game inside, a chance to win the NES Power Set, a Game & Watch game or the Nintendo Power Glove, and money off of a subscription to Nintendo Power magazine. Unfortunately, the cereal didn’t prove as popular as the games on which it was based, resulting in its lasting a little more than a year on shelves.
Posted by Chris Buchner at 9:00 AM