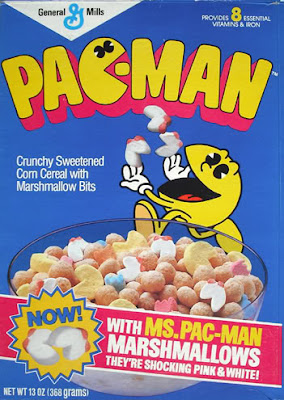 In 1980, Namco released their newest arcade game Pac-Man in Japan. Unfortunately, the game was largely overshadowed by other types and received very little attention. It wasn’t until the game was released in North America that year that it became a sensation. Not only was it a hit in arcades, but it became a merchandising giant that even yielded it having its own cartoon show.

In 1983, General Mills jumped on the Pac-Man band wagon and acquired the rights to produce a cereal based on the concept. The cereal featured the pellets Pac-Man ate in his games, which were basically sweetened versions of the pieces found in Kix cereal. Accompanying them were marshmallows in the shape of Pac-Man and his four ghostly enemies. The cereal was promoted with a series of commercials featuring cartoon versions of the characters as they appeared in the games, rather than the cartoon series. Kids who ate the cereal became known as “Ghost Chompers.” 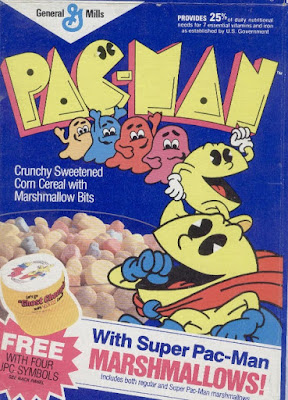 Despite the game’s failure, Super Pac-Man soon found its way to be represented in the cereal. Like Pac-Man would become larger upon eating a Super Power Pellet in the game, the cereal featured larger versions of the Pac-Man marshmallows. The commercial’s characters also changed some, with Pac-Man now sporting arms and legs. Super Pac-Man was given a cape to differentiate him, and he was voiced by veteran actor Paul Winchell.

The equally-popular Ms. Pac-Man was soon added to the mix, featuring a white marshmallow piece with a pink bow to make it the first two-colored marshmallow in a cereal. Notably, the commercial that introduced her marshmallow piece featured one of the earliest appearances of a young Christian Bale.

To entice people to further purchase the cereal, it came with a number of premiums. The boxes advertised send-away offers for a Ghost Chomper hat, a bowl, a ring, a game watch, a whacky whipper, stickers and a neon camera. There was also a sweepstakes people could enter to win a full-size arcade game or a mini electronic version. At one point, boxes came with two free gummi-worms inside (because, y’know, a kid can never have TOO much sugar at breakfast!).