Since his introduction in 1981, Mario has become one of the most recognized video game characters around the world and Nintendo’s official mascot. Mario is the short, portly plumber who spends his time saving the Mushroom Kingdom from the machinations of the evil reptile, Bowser.

To go along with the construction site setting of the game, Mario was originally considered a carpenter. His design came out of necessity, making use of graphical limitations at the time. To allow his movements to stand out against his own body and the background, he was given red overalls and a blue shirt. The incorporation of a red hat was to avoid animating hair, which Miyamoto hated. As a mouth would be too hard to animate, Mario was given a mustache and an enlarged nose to further establish his being a human. Mario’s signature white gloves were an invention of American artist Zavier Leslie Cabarga, who was hired to do the artwork of the American Donkey Kong cabinets and made several tweaks to Miyamoto’s original design. Miyamoto had planned to use Mario as a go-to character for various games he developed, mostly in cameo roles, as he felt Donkey Kong was the strongest character in the game.

Donkey Kong became a hit, moving over 60,000 cabinets within its first year of release. Nintendo tried to duplicate the success with a sequel called Donkey Kong Jr., in which the titular younger Kong had to rescue his captured father from the clutches of Mario (the only time he would be depicted as a villain). While the sprite remained unchanged, Miyamoto completely redesigned Mario’s image for the cabinets to make him younger, rounder and more cartoony. In 1983, Mario joined Donkey Kong and Pauline on CBS Saturday mornings in the Donkey Kong portions of Saturday Supercade for two seasons.

Mario’s next appearance was in his own spinoff game in 1983 called Mario Bros., which was part of Nintendo’s LCD-based Game & Watch series. It also introduced Luigi, Mario’s brother, to allow for two players. Luigi was a palette swap of Mario; being depicted with green coloring instead of red but otherwise looking exactly the same (although, this was only evident on the game’s box art and not within the game itself). A story persists that Luigi’s name came from the fact there was a pizza parlor named “Mario & Luigi’s” near Nintendo’s Redmond, Washington headquarters. It was also noted that the Japanese word “ruiji” means “similar.” In Mario Bros., Mario and Luigi worked at a bottling plant and had to prepare packages to be loaded onto delivery trucks by passing them back and forth across a series of conveyor belts. The game opened up like a book and allowed two players to control either Luigi on the left or Mario on the right. Updated re-releases of the game would include elements and additional characters that appeared later in the franchise, as well as the more established looks for the brothers.

A few months later an unrelated arcade game also called Mario Bros. was released. In that game, Mario and Luigi had to combat a series of creatures as they emerged from pipes in an underground setting by bopping them from below, and then jumping on them directly. It was pointed out that Mario more resembled a plumber than a carpenter, and since the game took place underground, Miyamoto changed his profession accordingly. After that change, Miyamoto also identified the character as Italian due to his mustache and large nose. The pipes were inspired by several manga which depicted waste grounds with pipes lying around, and the unusual green color came from the limited palette and Miaymoto’s desire to keep the game colorful. Mario’s clothing also changed, with his shirt and overalls switching colors due to a different art team. The game was only moderately successful and ported to several home consoles prevalent at the time.

In 1985, Nintendo released the first in the series of games that would become well-known the world over: Super Mario Bros. Made specifically for Nintendo’s home consoles (although later ported to arcades), the game introduced the world to the Mushroom Kingdom which Mario and Luigi had to defend from Bowser and his Koopa Troopas. Originally intended to be an ox based on Ox King from Alakazam the Great, Miyamoto and Takashi Tezuka designed him to look like a giant, sinister turtle to match his turtle-like minions (adapted from the previous game). Miyamoto considered several Japanese names for Korean dishes for Bowser before settling on Daimao Kuppa (where the Koopa comes from). Along with the turtles, Bowser’s minions included brown mushroom creatures called Goombas, piranha plants that lived in pipes (also carried over from the previous game and allowed travel around worlds and levels), squid-like Bloopers found in the water, fish-like Cheep Cheeps and more sinister animal-like foes. Unlike the previous game, most enemies could be defeated by being jumped on immediately.

The ruler of the Mushroom Kingdom, Mario’s love interest and frequent damsel in distress was Princess Peach. Designed by Miyamoto and finalized by Yoichi Kotabe, Peach was made to look “stubborn but cute”. In Western countries, she was known as Princess Toadstool until 1993’s Yoshi’s Safari, when the “Peach” name reached across the ocean and took over. The majority of her citizenry are mushroom-like people known as Toads (however, one of Peach’s loyal retainers is named Toad). They were designed to be simplistic yet cute and pleasing to everyone.

Aiding the Mario Bros. were a series of power-ups, which would increase in number and change with each successive game. Mushrooms would either allow the brothers to grow in size or grant an extra life, depending on their color (red and green, respectively). Fire Flowers allowed them to shoot fireballs and also changed their overalls to white while their shirts retained their distinctive colors. Starmen gave them limited invincibility, changing the game’s music for the duration of the effect. Miyamoto wanted to give players a challenging experience, incorporating the ticking clock device and having the overall difficulty increase as the game progressed with new enemies and fewer power-ups.

Super Mario Bros. was included with the Nintendo Entertainment System (NES) upon its release, and became one of the best-selling games of all-time; helping to alleviate the videogame slump America was experiencing. The following year, Super Mario Bros. 2 was released in Japan serving an extension of the original game, but with an increased difficulty level. Two-player mode was eliminated in favor of a player selection of which brother to play with. Each had their own gameplay differences: Luigi had the ability to jump higher while Mario moved faster. 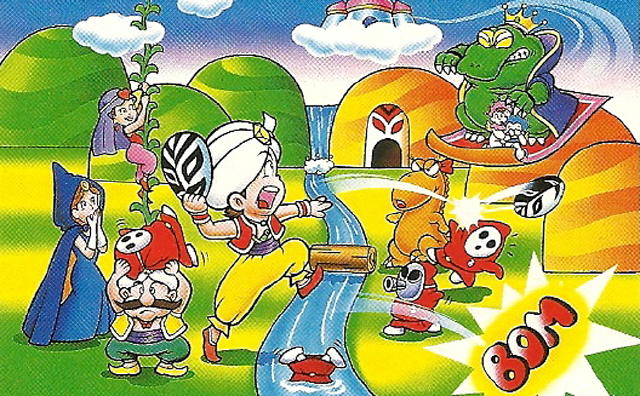 Believing it too difficult for Western audiences, Nintendo of America chose to adapt the game Yume Kojo: Doki Doki Panic into their own Super Mario Bros. 2. That game featured Mario, Luigi, Peach and Toad as playable characters who plucked items out of the ground and picked up enemies to be used as weapons. Each character was given their own characteristic to differentiate their gameplay: Luigi could jump the highest; Toad could pluck the fastest; Peach could float over long distances; and Mario was the most well-rounded. It also introduced a new character design for Luigi, depicting him as taller and thinner than Mario (although his later gameplay sprites would continue to be a simple palette swap of Mario’s until Super Mario Kart). Although it left players confused over the radical differences, the American version continued to sell over ten million copies to become the third-highest selling game released for the NES at the time. The Japanese version eventually made it to America under the name The Lost Levels.

The cartoon featured subtle differences from the video games. A rap introduction written by Haim Saban and Shuki Levy established the story of Mario (also Albano) and Luigi (also Wells) being sucked down a drain from Brooklyn into the Mushroom Kingdom where they help Princess Toadstool (Jeannie Elias) and Toad (John Stocker) fend off King Koopa (Harvey Atkin) and his minions. Koopa was depicted as all green with a crown, whereas in the game he had bits of orange on his body and a red mane. Koopa would usually wear an outfit related to the theme of the episode or episode title, as would his minions. Mario would introduce the situation to the audience via his “Plumber’s Log” as a parody of Star Trek, and was often depicted as always being hungry for pasta. Their battle cry was “Pasta Power!” and when the going got especially tough, the brothers would engage in a patty-cake routine before overcoming any situation.