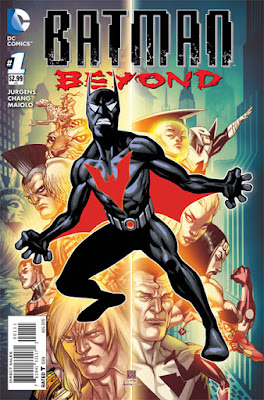 
Batman Beyond was an animated series by the people who brought you Batman: The Animated Series and the rest of the DC Animated Universe from 1999-2001. Set in the future, Bruce Wayne had long-since retired and Gotham City, now Neo-Gotham, continued on without him. Teenager Terry McGinnis stumbled upon Bruce's secret and wormed his way into becoming the new Batman; utilizing a technologically advanced suit that could fly, turn invisible, and gave him enhanced physical abilities.

In the decade since the series ended, DC Comics has resurrected the franchise. A six-issue mini-series leading into an ongoing incorporated elements of the cartoons with current DC history, setting it in the future of the comics' universe. From 2014-15, New 52: Future's End, a weekly event series set 5 years in DC's future, saw Terry traveling back to the past to stop Brother Eye, an A.I. created by Mr. Terrific and Batman, from conquering his home in the future. During the series, McGinnis died and a retired Tim Drake, aka Red Robin, took up his mantle. The series ended with Drake shunted forward into McGinnis' future.


Now, this isn't your older brother's Batman Beyond. Neo-Gotham is now the only city left unaffected by Brother Eye's takeover. McGinnis' mother is gone and his little brother Matty now lives with one of the resistance against Brother Eye. Also, Batman's suit has an A.I. program named after and based on Wayne's faithful butler Alfred. After taking out some Jokerz, Batman promises Matty to rescue those imprisoned by Eye and looks to infiltrate one of Eye's concentration camps.

GRADE: B-. DC has tried very hard to suck all the fun and joy out of their books since the New 52 reboot in 2011, and it's finally reached their future. While some of the names are the same, there's very little here tying this book into the animated series on which it's based. That's not to say that Dan Jurgens and Bernard Chang haven't delivered a well-done comic; but considering the brand they're playing with it will come as a surprise for anyone who was a fan of the original series and hadn't read or read-up on Future's End. In fact, they've gone so far as to alter the title logo to drive that fact home. Carried over from Chang and Marcelo Maiolo's run on Green Lantern Corps is the colorization of certain action panels with just red and white. It adds an interesting touch to some action scenes, emphasizing the impact much in the way the screen would flash during fights throughout the original DC Animated Universe.

This issue came with two covers, seen below. What did you think of this issue? Let us know in the comments or on Facebook by clicking the link on top of the right-hand menu. 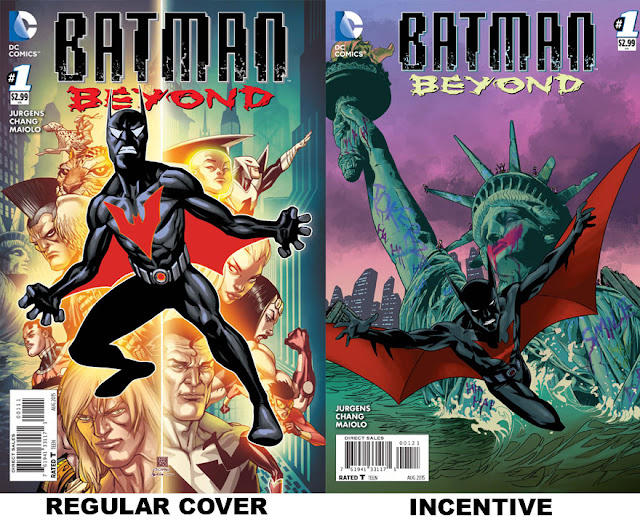 Posted by Chris Buchner at 9:02 AM